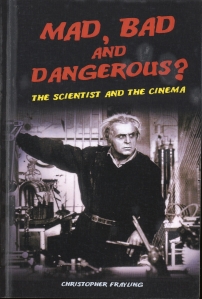 A recent acquisition to the Arts & Social Studies library is ‘Mad, Bad and Dangerous? The scientist in the cinema’ by Andrew Frayling.

Now most of us will be familiar with the image on screen of the mad scientist and Hollywood’s portrayal of the scientist as mad and deranged is commonplace – but is this image justified and why is technology often portrayed as something to fear?

In this entertaining and thought-provoking book Frayling claims that
“… cinema has had an uneasy relationship with science and technology: scientists are almost always impossibly mad or impossibly saintly and technology is very bad for you.” Is the scientist destine

d always to be portrayed as mad or nerdy? Frayling explores the history of, what he calls the ‘cinematic scientist’ and how Hollywood would use the scientist to represent the technological phobias of the time, from the fear of poison gas in the 1920’s to genetic engineering today.